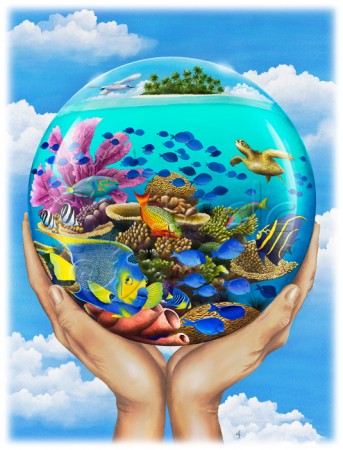 Coral reefs aren’t just beautiful – they’re essential to the health of our planet. Coral reefs protect coastlines from erosion by acting as a natural buffer against waves, storms, and floods. They are also form the foundation of the most biologically dense areas of the ocean, supporting more than a quarter of all marine life. But human activity has put these reefs in jeopardy. One-third of them face extinction.

The destruction of coral reefs wreaks havoc on entire ecosystems. Overfishing, pollution, and coastal development are suffocating reefs with layers of sediment and trash. Climate change is warming and acidifying oceans, causing coral to expel the symbiotic algae they need to survive and the reefs to lose their color (this is called bleaching) and become more susceptible to disease and death.

But the impact of reef decline isn’t just felt below the surface. Historically, coral reefs have been a major source of protein-rich food for people: nearly 25% of the fish caught in developing countries come from these reef areas.

To date, one-fifth of the world’s coral reefs have already been lost. Scientists warn that with the current rates of greenhouse gas emission, which are expected to double in 50 years, we risk losing all reefs permanently, perhaps even within the century.

As a tourist, you can do your part. While you are on vacation in the tropics, don’t buy products made from coral, including jewelry. When snorkeling or diving, don’t touch or stand on the coral, or break off pieces for souvenirs. Remember, though they may look like rocks, the reefs are in fact vast colonies of small living animals. Touching them will cause severe skin irritation and, more important, may damage or kill these unique life forms. Please help preserve this beautiful underwater world for future generations. Respect the reef.   If you are want to find out out more about coral reefs and their conservation, there are many groups to contact, including the Center for Marine Conservation (http://www.oceana.org), the Cousteau Society (http://www.cousteau.org), Greenpeace (http://www.greenpeace.org/usa/en), the Ocean Conservancy (http://www.oceanconservancy.org)  the National Wildlife Federation (http://www.nwf.org/nwf), the Coral Reef Alliance (http://www.coral.org), Reef Relief ( http://reefrelief.org), the Nature Conservancy (http://www.nature.org/ourinitiatives/urgentissues/coralreefs), NOAA Coral Reef Conservation Program (http://coralreef.noaa.gov), and lastly, here is a “Guide to Marine Plastic Pollution” – http://www.oberk.com/guide-to-marine-plastic-pollution. 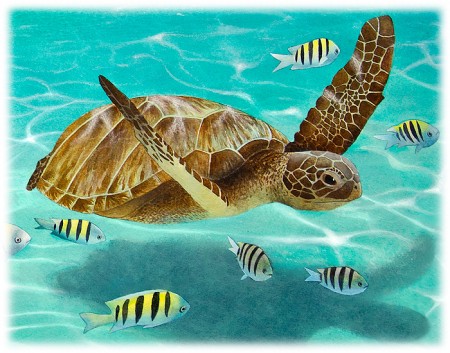 There are seven species of sea turtles: the Loggerhead, Green, Leatherback, Hawksbill, Kemp’s Ridley, Flatback, and Olive Ridley. The turtles you are most likely to see when snorkeling or diving in the Caribbean are the Green, Loggerhead, and Hawksbill. It is very exciting to see one of these animals swimming in the wild. Your first instinct may be to rush over for a closer look, but if you view a turtle at a distance and swim with him quietly, he is much more likely to stay and let you watch him while he goes about its business.   500 years ago, our tropical seas were teeming with turtles. They were so plentiful in the Caribbean that early explorers said they could almost walk from one island to another on the backs of turtles. Unfortunately, such eloquent words marked the beginning of a steep decline for the animals. New World exploration fostered a huge demand for turtle meat, eggs, shells, oil and leather, which drove sea turtles to near extinction. Commercial fishing and shrimping, pollution, and coastal property development are but the latest problems for these ancient, noble creatures. All five species of sea turtle found in U.S. and Caribbean waters are listed as either threatened or endangered.

As a tourist, you can do your part to protect sea turtles by never buying products made from their shells or skins or eating turtle meat, soup or eggs. In addition, like any educated consumer, you can ask this question when buying or ordering shrimp: Were these shrimp caught with turtle safe nets? Thousands of sea turtles are drowned each year in shrimping nets that do not uses TEDs — Turtle Excluder Devices. These devices are low-tech and inexpensive, and should be as commonly used as dolphin-safe nets.   If you want to find out more about sea turtles, there are numerous wildlife groups you can contact, including the Sea Turtle Restoration Project (http://seaturtles.org/index.php), the Center for Marine Conservation (http://www.oceana.org), the Cousteau Society (http://www.cousteau.org), Greenpeace (http://www.greenpeace.org/usa/en), the Ocean Conservancy (http://www.oceanconservancy.org), the National Wildlife Federation (http://www.nwf.org/nwf), and Sea Turtle Recovery (http://seaturtlerecovery.org). Note: For the past three years I have donated the use of my artwork for Sea Turtle Recovery’s annual Christmas card. 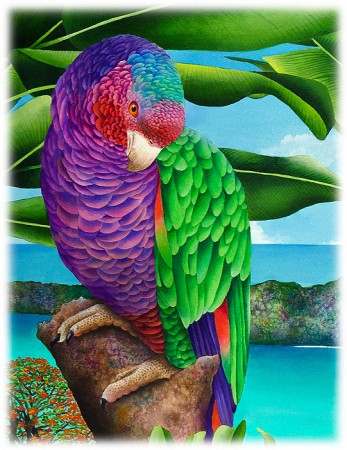 At present there are only five species of parrot to be found in the West Indies. They live on the islands of Puerto Rico, St. Lucia, St. Vincent, Cuba, and Dominica. Just as beautiful as their cousins in Central and South America, they are seldom seen in the wild because they have been pushed to the brink of extinction by hunting, illegal pet trade, and habitat destruction. Each species is unique to only one island. To find out more, check out Parrots International (http://www.parrotsinternational.org).